What and where to eat in Spain? - Exclusive Spain
18471
post-template-default,single,single-post,postid-18471,single-format-standard,cookies-not-set,ajax_fade,page_not_loaded,,qode-theme-ver-10.1.2,wpb-js-composer js-comp-ver-5.1,vc_responsive

What and where to eat in Spain?

17 Apr What and where to eat in Spain?

Posted at 12:35h in Cuisine, Travel by Admin
0 Likes
Share

Most stereotypes about Spain are related to food. When I started to learn Spanish at school, I remember one of the first class was about stereotypes and what came into our minds when we thought of Spain. Most of us thought about tortilla, jamón, tapas, paella and sangria. However, the Spanish cuisine is much more than that and I started to realize it when I travelled to Spain and when I finally moved to Spain. Spanish food is varied and a big part of Spanish culture.

If you are in the north east, in Catalonia
The traditional dishes of this area are influenced by ingredients of the Mediterranean coast: vegetables (such as eggplants, artichokes or tomatoes), fish, seafood, olive oil, but also meat as Catalonia´s geography is characterized by the moutains too, with the Pyrenees to the north.
Enjoy an escalivada, whose principal ingredients are grilled red pepper and eggplant. The vegetables are accompanied by bread with tomatoes, salt, olive oil, anchovies and onions.
The escudella i carn d’olla is a dish typically served in two parts. The first part, the escudella is a soup stewed with meat and vegetables (which have been removed), with pasta or rice. The second part, the carn d’olla, is the meat and vegetables cooked first in the soup, and then served appart.
For dessert in Catalonia you can have a crema catalana made of milk, eggs and sugar. The sugar on top is burnt and it gives the dessert a crunchy and soft taste. 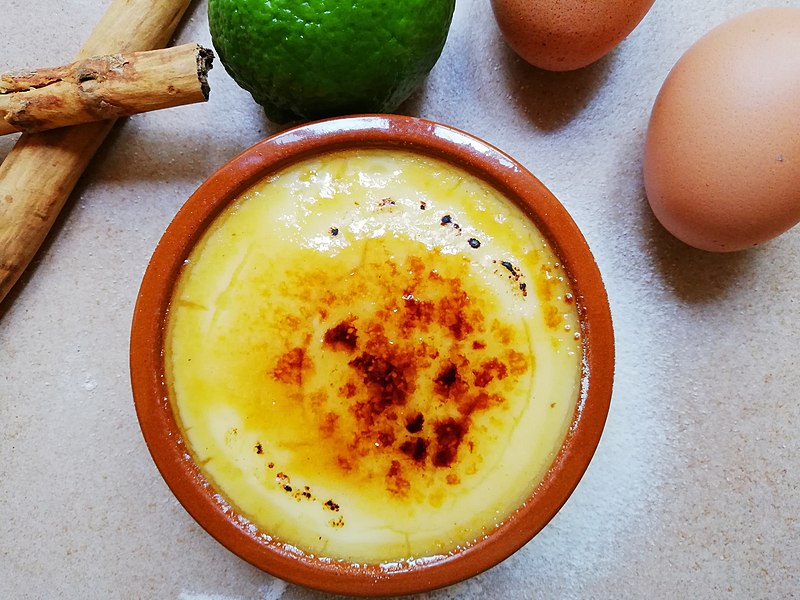 If you are in the north west, from Basque Country to Galicia
The north west cuisine is mostly based on fish and seafood. The pintxos are a must to eat while in the north west. They are small slices of bread upon which an ingredient or mixture of ingredients is placed and fixed with a toothpick.
The area of Navarra is known for the calamares en su tinta (squid in its ink). Heading west, in the País Vasco (Basque country) you should definitely try the chacolí, a type of white wine, included in various recipes of the País Vasco. For instance, the chicharro (fish) with chacolí, tomatoes, onions, carrots, leeks, garlic and olive oil is typical there but there are many dishes and bacalao (codfish) is one of the flagship ingredients of this area!
Let´s follow the coast, to Galicia where you could enjoy the pulpo a la gallega (octopus with olive oil, salt, pepper) or the famous tarta de Santiago, a cake characterized by its almond flavour and decorated with Santiago´s cross.
In Asturias, the fabada is a typical dish with beans, morcilla (blood sausage), chorizo, panceta (bacon) y lacón (pork´s shoulder).

In the center of Spain, Madrid and surroundings
The most famous dish of the center is probably the cocido madrileño made of chickpeas with vegetables, meat (chicken, chorizo, pork), onion, cabbage, green beans, rice, oil and garlic. With almost three hours of preparation, the result is a very tasty powerful stew.
Besides the cocido madrileño, the bocadillo de calamares (squid sandwich) is one of the most known recipes of the area. Squids are put in a baguette cut into two parts and are usually accompanied by a delicious sauce. 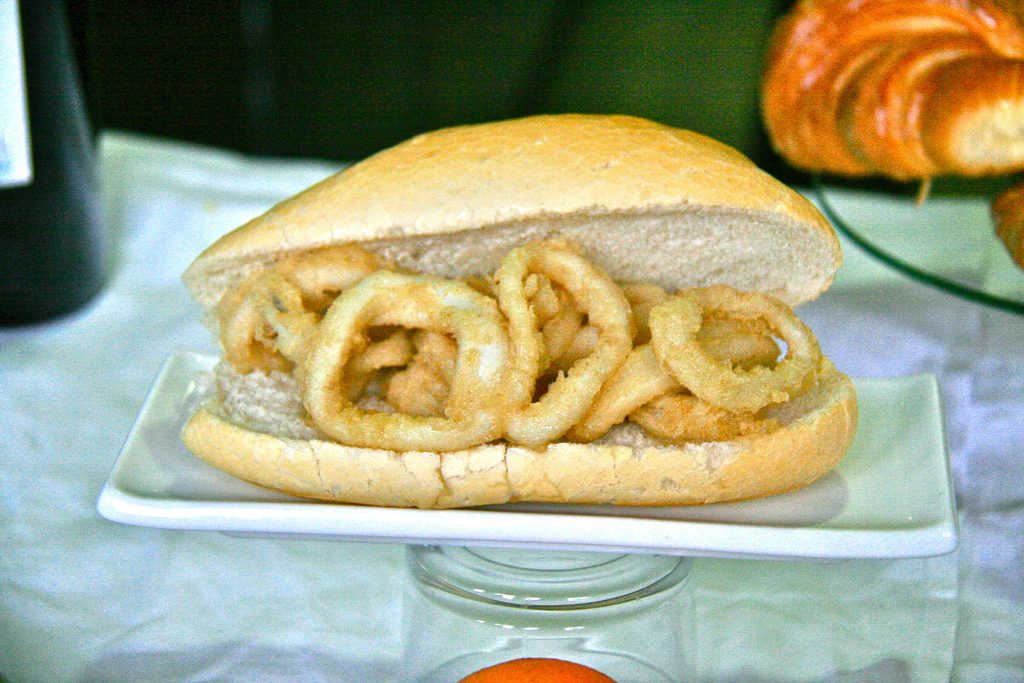 Let´s head to the south part of the country, Andalusia
Andalusian cuisine is one of the most emblematic of the country. One of the most known dishes from this region enables Spanish people and tourists to escape from the summer heat. We are talking about the gazpacho, star of the summer. It is a cold soup whose principal ingredients are olive oil, tomatoes, green and red pepper, cucumber, garlic, bread (or carrots if you want to give a smooth texture) salt, vinegar and water. The gazpacho has become a national dish, made in every home, and we all know, that the best one is the one my mother makes!
The salmorejo, typical from Córdoba, is considered as the cousin of the gazpacho but it is thicker because it needs much more bread! The gazpacho and the salmorejo are traditionnally served with boiled eggs and jamón.
Something you will only find there, are the sherry wines, cultivated only in the province of Cádiz. These grapes have grown in white and black soils, heated by the Andalusian sun and breathed the winds of the Atlantic sea. The wineries and the technique are unique in the world.
Other typical dishes of the south are las migas de pan (bread crumbs), the pescaíto frito (fried fish) or the tortillitas de camarones (shrimp fritters).

If you are in the east
If you find yourself in the east, do not miss the paella. Its name refers to the type of pan used to cook the dish. Paella is known internationally but Spanish people consider it to be originally from the region of Valencia.
There are different ways to cook a paella but the principal ingredient is of course, always, the rice. The traditional paella was a mix of rice with ingredients that people have closed at hand (chicken, beans) but, over the years, the recipe has been changing and you can find paellas with seafood ingredients for instance.
The arroz al horno (oven-baked rice) is also a typical dish in this area. It is elaborated in a cazuela de barro (clay cooking pot) and as its name points out, the rice is cooked in the oven with caldo de cocido (soup which the principal ingredients are pork or chicken). The ingredients which accompanied the rice are chickpeas, the soup obtained, potatoes, tomatoes and a head of garlic.
The horchata is a beverage whose origins date back from the 13th century in Valencia. It is made with water, sugar and tiger nuts and sometimes with cinnamon and a zest of limon. 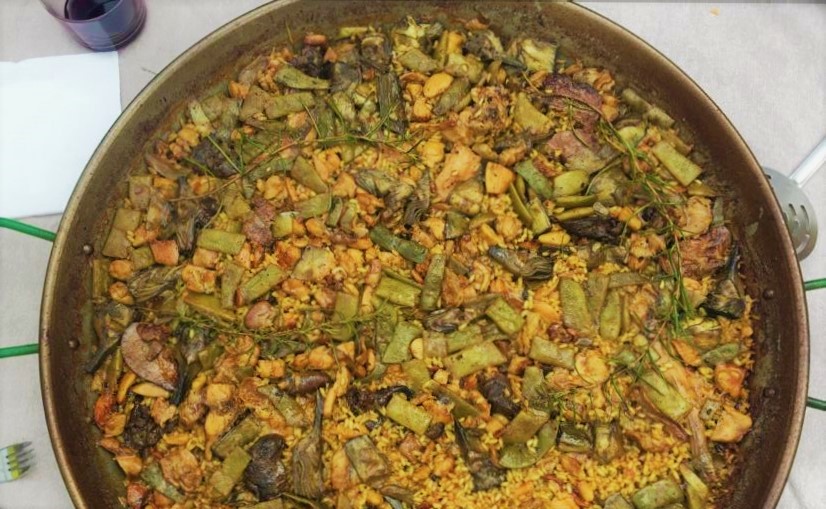 Things you can eat everywhere
The famous tortilla de patatas (potatoes omelet), is definitely part of the Spanish identity and you could eat one everywhere in Spain, such as is the jamón serrano, which correspond to the black pigs hind legs. These pigs have lived in the hills mainly eating acorns, and some, also eat olives.
The calamares (squids) can be found everywhere. In Madrid though, the speciality is the sandwich of squids.
The croquetas are also a flagship dish of the Spanish cuisine. Made with a béchamel, you can find croquetas of different savors, such as gambas (prawns) or jamón. They are fried.
Also fried, the patatas bravas consisting of white potatoes cut into irregular cubes and served warm with a spicy sauce. They are from Madrid but they can be found everywhere in Spain.
Last but not least, the churros, are very popular! It is a Spanish tradition to eat churros for breakfast or snack. They are accompanied with hot chocolate and icing sugar.

Sangria is probably the most known Spanish beverage out of Spain but the country also offers a lot of wines varieties such as Rioja or Ribera del Duero (red wines) and tempranillo or verdejo (white wines) for the most famous! The vermut is also a typical beverage, it is an aromatized wine flavored with various botanicals.

These dishes and beverages are only examples of what you can eat and drink while in Spain. Spanish cuisine is really rich and you will be amazed by its different flavours.