48hours through the Basque Country villages

Let´s travel to some of the most beautiful villages of the Basque Country. The Basque Country is a beautiful region of Spain located in the north-west. Pretty cities, fishermen towns, amazing coastal landscapes, beaches, gastronomy and natural reserves totally define this area.

If you want to visit properly this region, you will need a few days. Here comes what we recommend for two full-days excursions from Bilbao.

Day 1
Head to San Juan of Gaztelugaxte. On your way you could stop to visit the Castillo de Butrón, of neo-gothic style, which will take you back to the Middle Ages. Located between Bilbao and San Juan de Gatzelugaxte, the castle has not always been a castle. In the mid-13th century it was the Butrón residence and a tower house. The following century, the 5th Lord of Butrón decided to transform it into a castle.
For more than three hundred years, until the beginning of the 16th century, it was the scene of fights between families of the Bizkaia´s nobility. It was then abandoned and it deteriorated until its restoration in the late 19th century, where it acquired its present appearance. The castle was almost completely rebuilt in 1878 by the architect Francisco de Cubas. This is when he acquired its fairy-tale look inspired by Bavarian castles. This look is due to the wish of the owner, who wanted to create something spectacular rather than produce something in which people could actually live.
Sitting on some rocks and surrounded by a hundred-year-old forest, let it take you back to the Middle Ages. Unfortunately, you could not enter into the castle but you could enjoy the view from the outside and walk through the forest.

This picture was taken by Txemi López in Pixabay

Then head to San Juan of Gaztelugaxte, an islet on the coast of Biscay. You might recognize it from the famous TV show Games of Thrones. The hermitage of San Juan de Gaztelugaxte stands on a rocky outcropping in the Cantabrian Sea, facing the Biscayan coast. It is one of the jewels of the Basque Country.
You will need to go through a narrow path and climb a long flight of stairs to go there but the climb is worth it! On top of the islet you could visit the hermitage dedicated to John the Baptist, which is connected to the mainland by a stone bridge and a 241-step staircase. It is surrounded by an amazing environment of cliffs and beaches, which will leave you speechless.
The hermitage was built more than a thousand years ago. The church is not the original one because it has been rebuilt over the centuries due to fires or battles. The legend says that if you ring the bells three times, you will attract good luck and chase away evil spirits.
Admission is free however, it has a daily quota of visits. That is why we suggest you to pre-book your tickets.

This picture is from Unsplash

Continue to Bermeo, less than 10 kilometers from San Juan de Gaztelugaxte. It is a colorful coastal village located within the Urdaibai Biosphere Reserve.
Bermeo is one of the most important fishing villages in the Basque Country, with a long maritime tradition. It stands as one of the few fishing villages that still lives in the same way its ancestors did, from the sea and from fishing. The village has a unique personality and charm. Discover its port and its colorful houses. Bermeo is a small town but in the historic center you could discover monuments and museums such as the Museo del Pescador in the Torre Ercilla, declared Bien de Interés Cultural (Cultural Interest Assets). 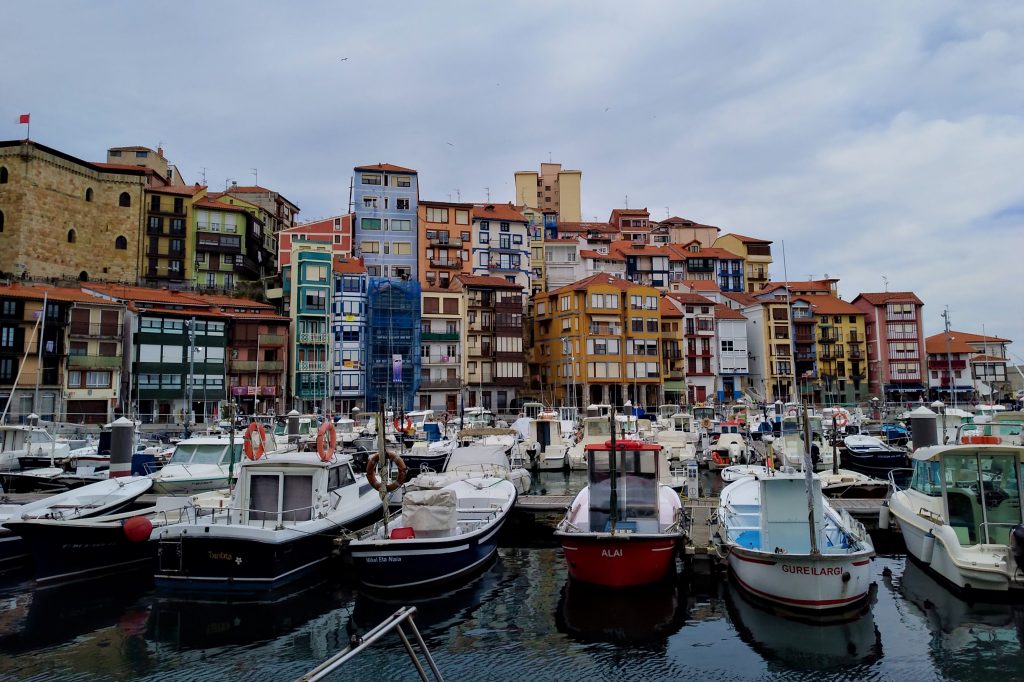 For lunch, you definitely have to eat some pintxos. The pinxtos are small bites, small pieces of bread, topped with various traditional ingredients -both traditional and cutting-edge-. They are one of the most fun and social ways to experience Basque culture first-hand.

After lunch, head to the small and picturesque village of Mundaka, one of the most beautiful villages of the Basque Country. Located in the Biosphere Reserve of Urdaibai, it is a coastal village famous to have one of the largest left breaking waves of the world, which attracts surfers from all over the world. The village is centered around the small port, a really picturesque area, and is associated with the sea, the history of sailing and fishing. You can head to Santa Katalina Hermitage to enjoy the views over the sea. 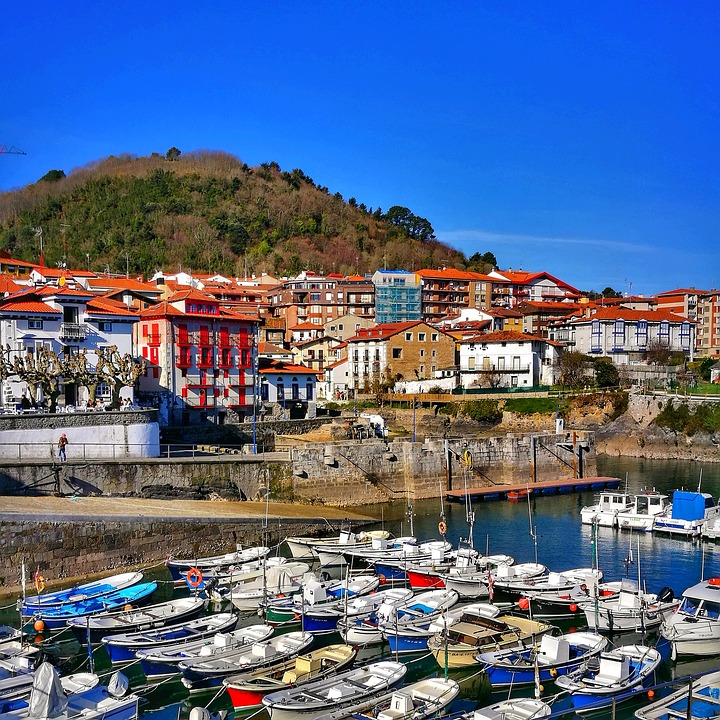 This picture was taken by Juan Manuel Garcia Bilbao in Pixabay

If you have time, outside the city center, discover the Mirador de Portuondo and enjoy the views over the Biosphere Reserve of Urdaibai.

After your visit of Mundaka, head back to Bilbao, 40 minutes away from there.

Day 2
For this second day, start visiting Guernica (Gernika in Basque), located 35 minutes away from Bilbao. Picasso immortalized the town of Guernica in his painting of the same name, which commemorates the town’s bombing that destroyed the city and took many lives in 1937 during the Spanish Civil War. Gernika was chosen because it plays an important role at both political and historical levels. The town has long been a seat of Basque autonomy: here, under the Gernikako Arbola (Tree of Guernica), centuries of Spanish lords swore to respect Basque rights and privileges and were granted autonomy in the Middle Ages. Next to the tree, you could find the Assembly House, where the political leaders had to decide the fate of their people over the ages. Both the Assembly and the tree offer insights into the history of the Basque people. 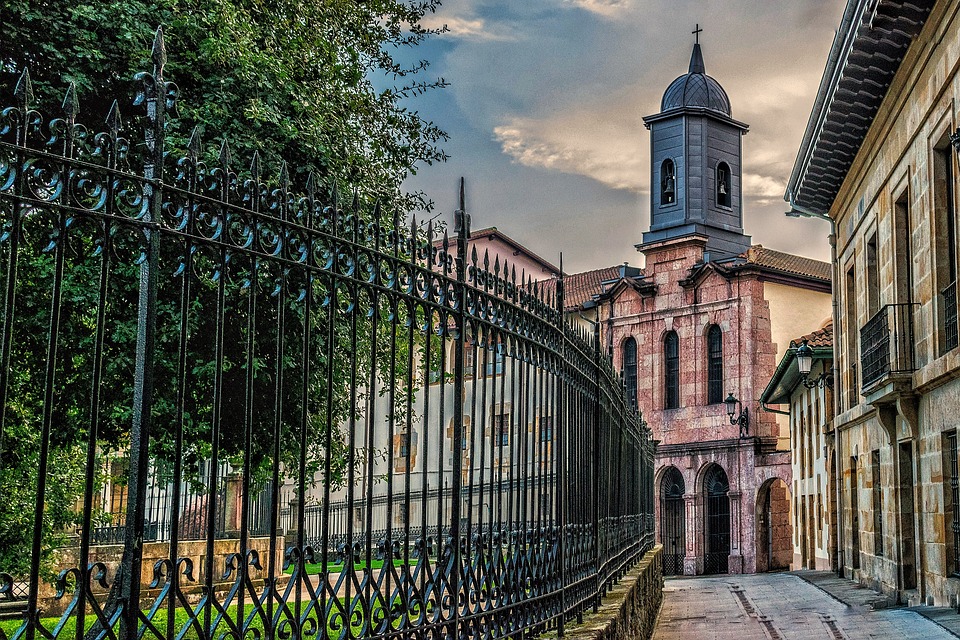 This picture was taken by javier alamo in Pixabay

After visiting Gernika, head to Lequeitio (Lekeitio), another of the beautiful fishing villages of the area, located 35 minutes away from Gernika.
For lunch, you could definitely enjoy some fish. The hake, the codfish, and the “Txipis” (squids) in their own ink sauce are some of the most famous dishes of the Basque cuisine.
Visit the medieval old town with alleys and places such as Plaza de la Independencia. Discover palaces (like the Palace of Abaroa) which date back from the 16th and 17th centuries and admire some fishermen´s houses. You should see the Town Hall and the Basilica of the Assumption of Santa María with its Gothic altarpiece bathed in gold.
Do not miss the port and the beaches. The river Lea flows into Lekeitio between two beaches: the beach of Isuntza and the beach of Karraspio. Head to the beach of Isuntza when, during the low tide, you could walk to the small island of San Nicolás located in the bay. From the beach you could also enjoy the pleasant views of the Biscayan coast. 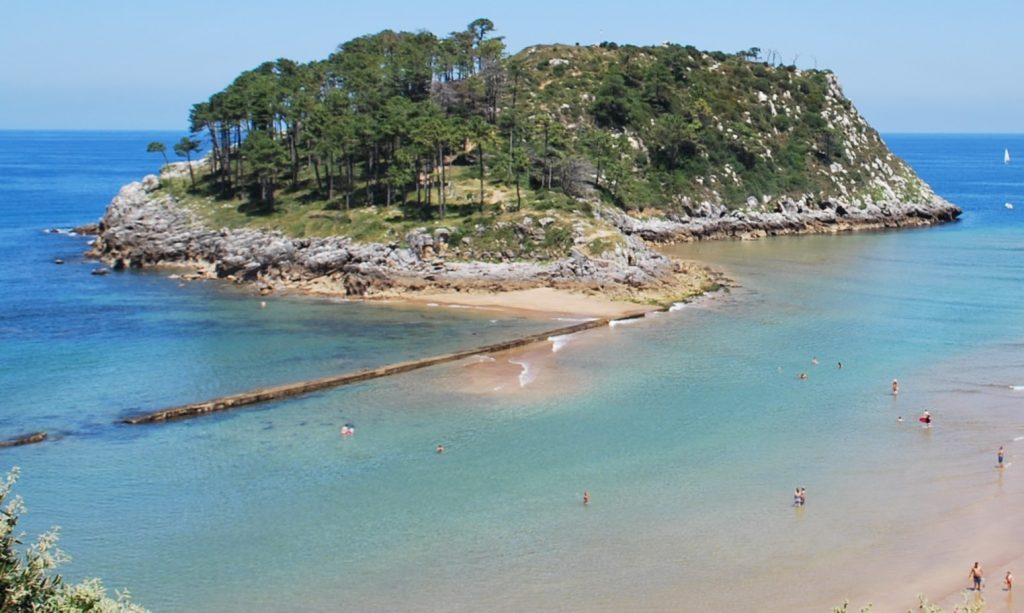 Link to the original picture

Head back to Bilbao, one hour away from Lekeitio.

How to get to theses villages:
From Bilbao, the total driving time for both days is approximately two hours.