TODAY I TRAVEL TO MÁLAGA 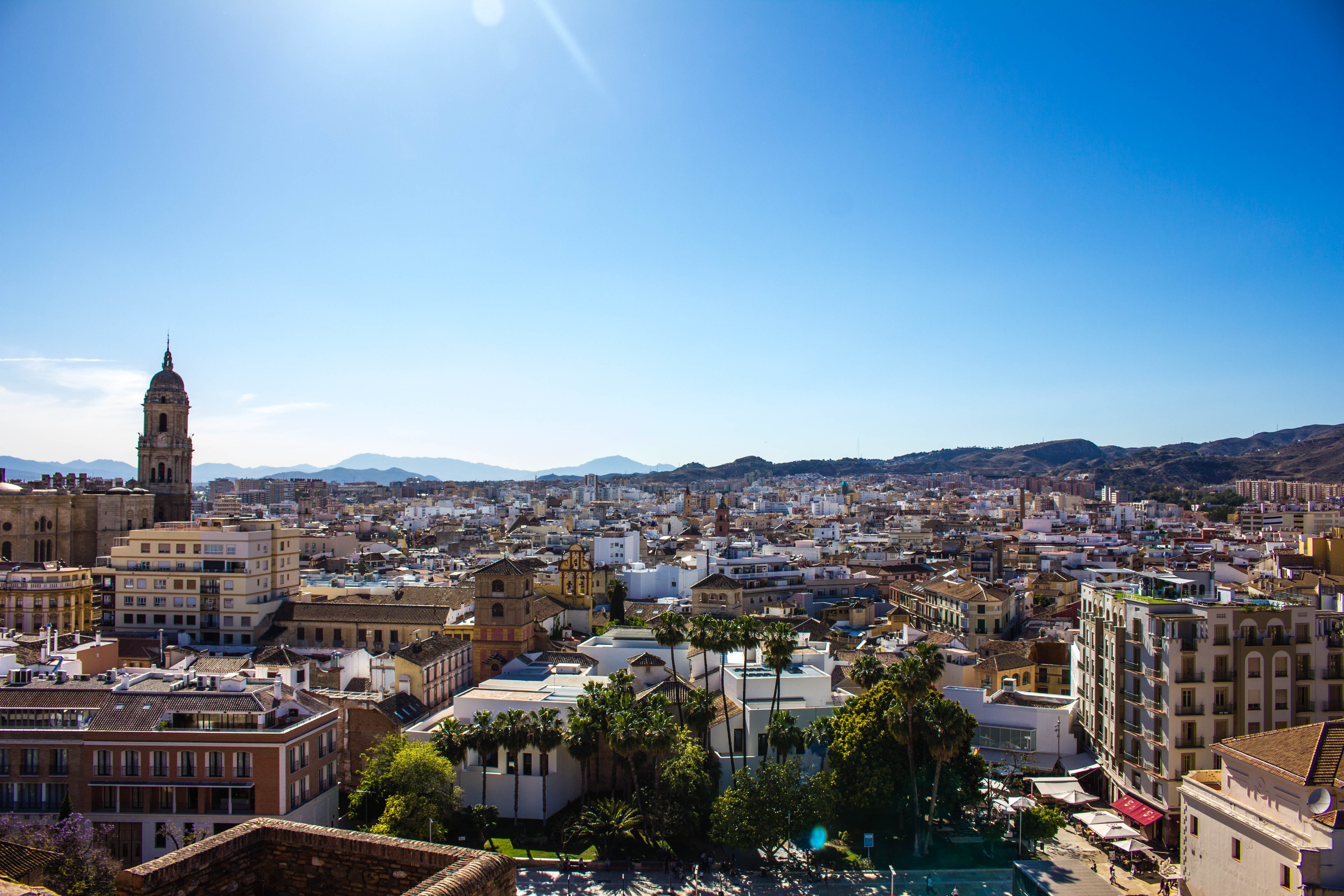 12 Jun TODAY I TRAVEL TO MÁLAGA

Today, let´s head for the second-most populous city of Andalusia, which lies on the Costa del Sol (Coast of the Sun) of the Mediterranean Sea, #TodayITravelTo Málaga, in Andalusia.

Málaga is one of the oldest continuously inhabited cities in the world. It has been inhabited since prehistoric times but the Phoenicians are the ones who laid the first foundations of the city, more than 3,000 years ago. They founded a colony named Málaka.

The city was later dominated by the Carthagians, the Romans, and after the fall of the Empire, it was under Islamic rules from 711 to 1487. It was on 18 August, 1487 during the Reconquest of Spain (Reconquista) that Málaga fell into the hands of the Catholic Monarchs, after a four-month siege that remains one of the war’s bloodiest episodes.

After 1487, Málaga underwent major changes and transformations and in the 16th and 17th centuries, the port made the city an important commercial hub (wine and raisins its main exports).

The archaeological remains and monuments of the Phoenician, Roman, Muslim and Christian eras make the historic center of the city an open-air museum, displaying its history of nearly 3,000 years.

Nowadays, and after decisive changes and expansions, the cosmopolitan city of Málaga attracts tourists from all over the world. All year long, you can enjoy a subtropical-Mediterranean climate with very mild winters, hot summers and plenty of sunshine.

If you have never been to Málaga, here is what you can do in one day.

What to do:
Start your day in the historic center and admire the Roman Theatre overlooking the Alcazaba. The Roman Theatre dates back from the 1st century BC and was discovered in 1951. This arena is still used to host open-air performances today. The garum pools that were used to make Roman fish paste can also be admired in the glass prism in Calle Alcazabilla. 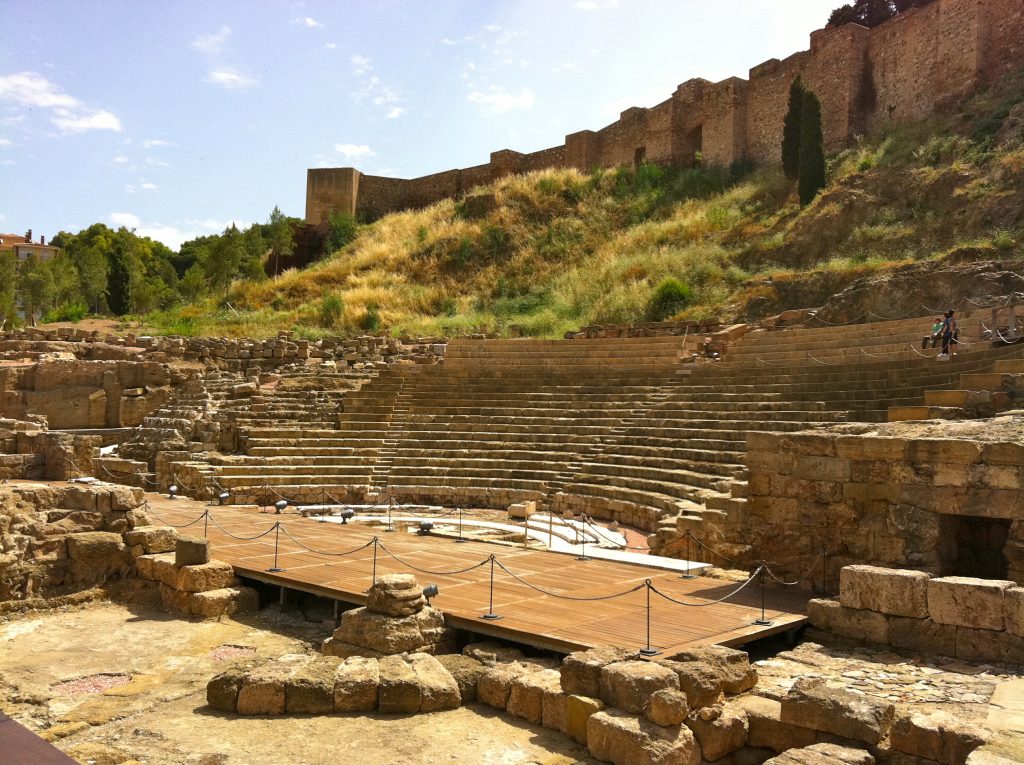 Continue your visit with the Alcazaba, a beautiful example of the period of Muslim domination and one of the most important monuments of the city. The Alcazaba overlooks Málaga from the Gibralfaro hill. This site includes Roman ruins as well as an archaeological museum. Originally it defended the city from the incursions of pirates but in the 11th century, it was completely rebuilt under Moorish rules. 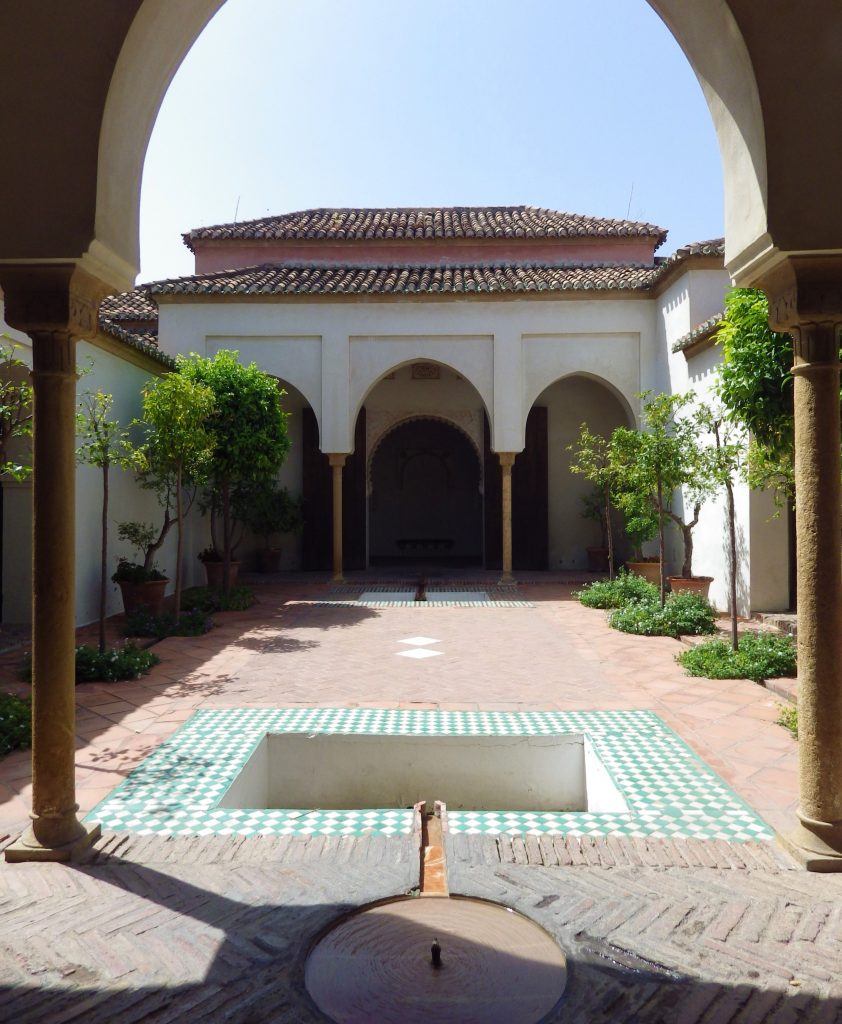 You can also discover the Castle of Gibralfaro (Castillo de Gibralfaro), towering the city and the Mediterranean Sea. It was built in the 14th century to house troops and protect the Alcazaba. Enjoy the amazing views of the port and the city! 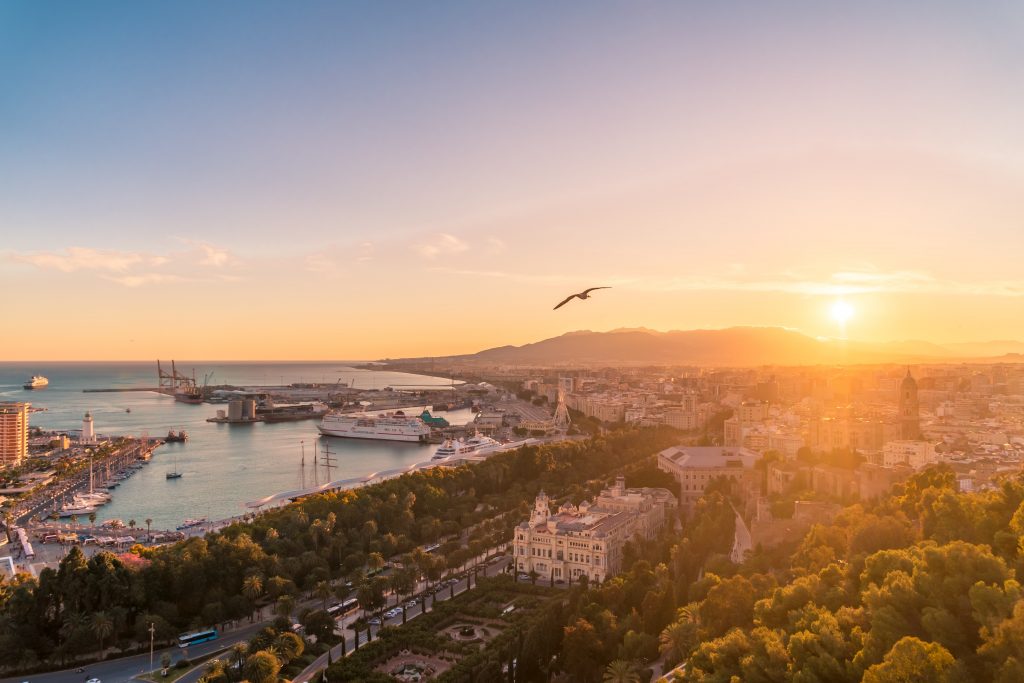 After that, head for the Cathedral Our Lady of Incarnation (Nuestra Señora de la Encarnación) where you could admire some holly used in celebrations such as The Holy Week of Málaga (Semana Santa). The cathedral combines diverse architectural styles: Gothic on the ground floor, Renaissance in its elevation, and Baroque in the main facade and decoration of its roof. 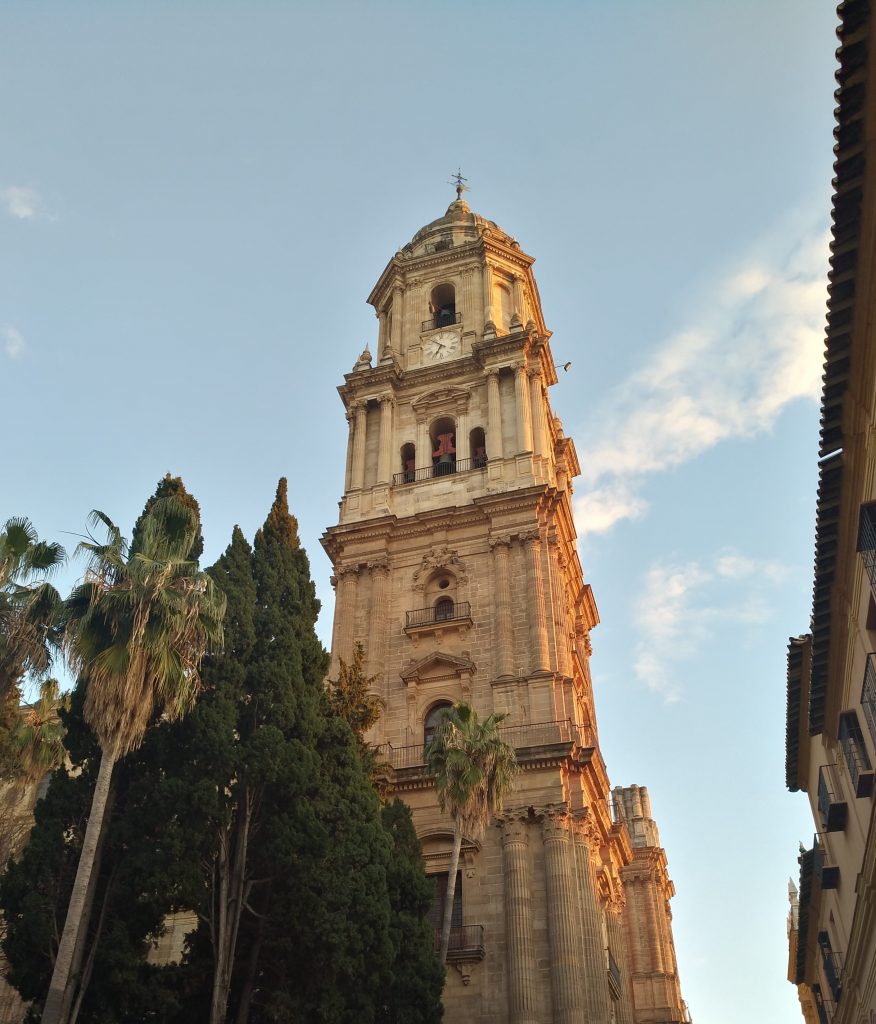 Continue through the historic center and go through the main street Calle Marqúes de Larios and the well-known Plaza de la Constitución, the heart of the city where most events take place.

You could have lunch at the Atarazanas Market, where you will find bars and restaurants to enjoy the gastronomy of Málaga, such as seafood and tapas, among many other things! There is also a large choice of fresh local food like fish, meat, cheese, fruits, etc.
If you feel like going to the restaurant, head for Beluga, a small temple of gastronomy in the city center, which pays tribute to Mediterranean cuisine with a creative point of view.

In the afternoon head for the Picasso Museum, located in the Buenavista Palace, declared national monument in 1939. Picasso, one of the most important artist of the 20th century, may have spent most of his life in France, but he was born in Málaga in 1881. This beautifully designed museum houses the private collections of the Picasso Family and show eight decades of work, from 1892 to 1972. 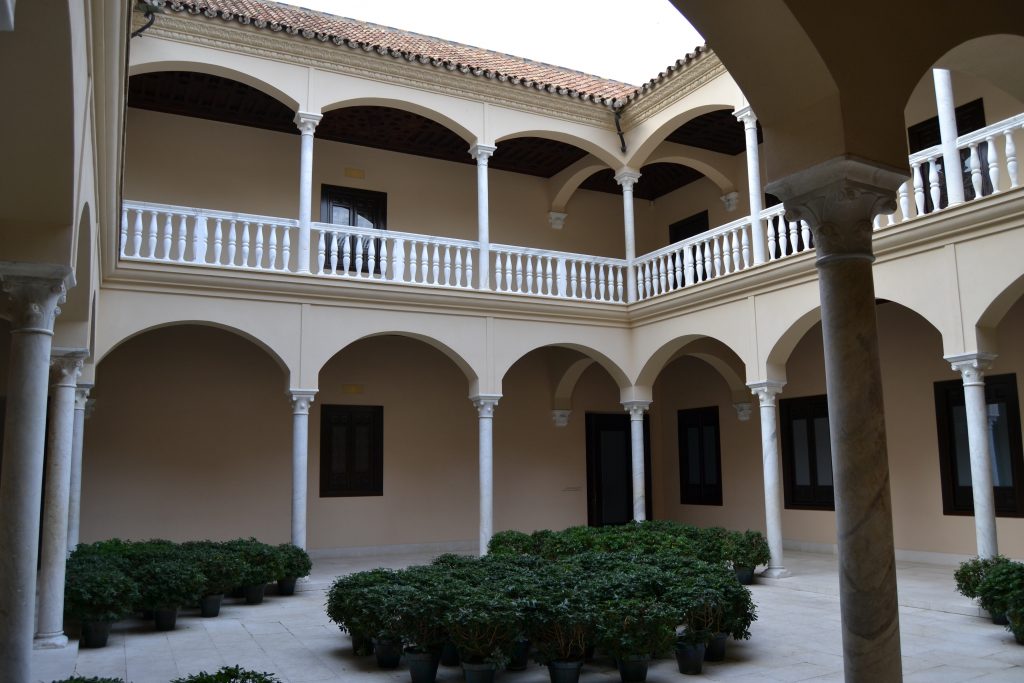 If you have time and are an art-lover, late this afternoon you can head for the port of Málaga to the futuristic rainbow cube, the Centre Pompidou. It offers a permanent exhibition of works from the Paris Centre Pompidou´s impressionist collection. It is the first establishment abroad of the French institution. A real opportunity to discover works of the 20th and 21st centuries. Besides the permanent exhibitions, they host two or three temporary exhibitions a year.

Located a few minutes away from the city center, you definitely have to enjoy a walk on the modern port´s promenade. There are lots of shops and restaurants and you should drink or eat something there while watching the sun sets. 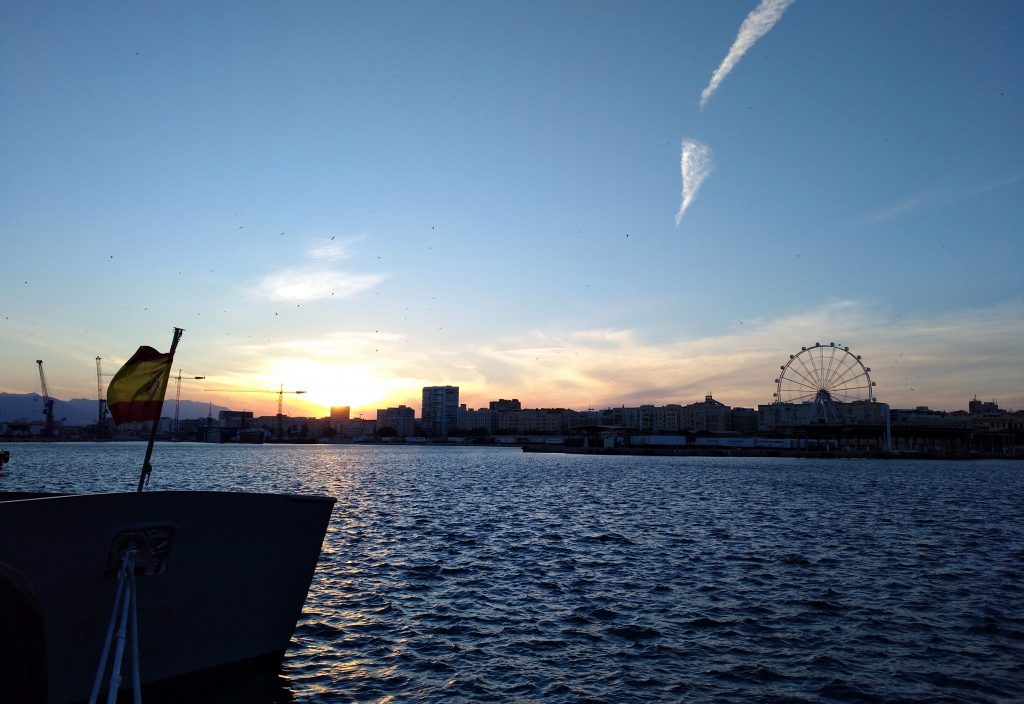 Where to stay:
Stay at the Gran Hotel Miramar, which houses a lot of history. This five-stars hotel is located in front of the beach. The hotel offers spectacular views over the city and the beach. It is a charming hotel inaugurated in 1926 by King Alfonso XIII. During the Spanish Civil War it was a hospital to attend to the injured. In 1939, the hotel opened its doors again but closed 28 years later. From 1987 to 2007, it housed the Justice Ministry and in 2016 the hotel opened again.

How to get to Málaga:
The city is an important communications hub and it is really easy to get there.
You can get to Málaga by train and by road. The high-speed train (AVE) connects Málaga to Spain´s major cities such as Barcelona, Córdoba and Madrid and the Málaga´s María Zambrano Station is one of the most important Southern Spain railway communication hubs.
Regarding the access by road, the city is well connected to the rest of Andalusia and the rest of the country thanks to various motorways.
If you want to get there by plane, the Málaga-Coast del Sol Airport, located only eight miles away from the city´s historic quarter, is one of the most important airports of the country and has connections to major cities worldwide. A real gateway to Andalusia!
Lastly, you can also get to Málaga by boat. The city has always been linked to the sea and has the second most important port of call for cruise ships in the Spanish peninsula.

Source of the cover picture